Installment loans are a very popular way to finance everything from a college education to a new vehicle. These types of loans are considered those with fixed loan terms that have a set term length. The interest rate on this type of loan will vary depending on the individual, lender, and/or use of funds. Today, we’re going to take a look at some of the statistics that have been discovered about installment loans in 2019 that will give you some better insight into this financial lending sector.

We’ve all seen the warnings issued by debt assistance organizations about payday loans. These types of loans tend to come with extremely high-interest rates and origination fees. Many borrowers for payday loans earn around the 30,000 dollar range. When they run into cashflow problems trying to cover their bills, they turn to payday loans. These types of loans don’t rely on credit history so many individuals can get approved with just income verification.

Installment Loan Rates Are Typically Capped Between 17 and 36 Percent

When you are looking for money to fund a large purchase, a low-interest installment loan is your best option. This is assuming you have good credit. However, if you don’t, realize that installment loan lenders typically have to follow state laws regarding maximum interest rates. In a survey taken of 32 states that implement a cap on the interest rate for an installment loan, their average cap rates ranged from 17 to 36 percent interest. It’s also important to note that this is very much state specific. In fact, five states don’t implement caps at all on installment loans.

The Bureau of Consumer Financial Protection did a study of the impact of payday loans on individual borrower behavior and financial outcomes. Part of looking at payday loans is understanding the loan sequences that can occur from a single loan. This type of sequence is when the borrower only pays interest and continues to owe on the payday loan for another loan term. This type of loan sequence has shown to end up in default 20 percent of the time.

The Delinquency Rate On Consumer Loans Is 2.34 Percent

Commercial banks keep track of the amount of borrowers who default on their loans so that they can better assess their company’s risk in the future. In a recent economic research study by the Federal Reserve Bank Of St. Louis, it was determined that around 2.34 percent of installment loan borrowers default on their loans. This number is trending upwards since 2016 when default rates were at an all-time low around 2 percent.

The Average Interest Rate For A Four Year Auto Installment Loan Is 5.50 Percent

If you’re looking to finance a new vehicle, now may be a good time to lock in your rate before it gets higher. Auto installment loans were at an all-time low around 2015 with interest rates close to four percent. Since then, auto loan rates have slowly been climbing higher and higher. In November 2018, the average interest rate was 5.29 percent. In February 2019, the interest rate has jumped to 5.50 percent. The interest rates for auto loans are expected to continue to climb over the next few years.

In a recent study, it was revealed that an astounding 69 percent of all payday loan borrowers use the fund for their recurring bills. These are bills like rent, food, cable, phone, and credit card bills. This doesn’t include unexpected expenses like car repairs or medical visits that are supposedly the reason that this type of high-interest short term loan is offered to the public. This statistic shows that the majority of payday loan users are those who have a constant shortage of cash. They’re more likely to continue to take out payday loans in multiple loan sequences.

Americians Spend Over 10 Billion Dollars On Installment Loans Each Year

Taking a look at the actual costs of using online installment loans to fund your purchases can be eye-opening. It’s estimated that Americans actually pay over 10 billion dollars each year on interest and loan origination fees for installment type loans. These loan amounts range from as small as 100 dollars to tens of thousands of dollars. These loans are typically comprised of payday loans, auto loans, and personal loans.

There are many statistics that are discovered about installment loans each and every month. Many protection agencies use their own sources to get the data they need to recommend specific regulations to the federal and state governments. The above are just some of the major highlights when it comes to specifically assessing installment loans and personal signature loans from an analytical standpoint. 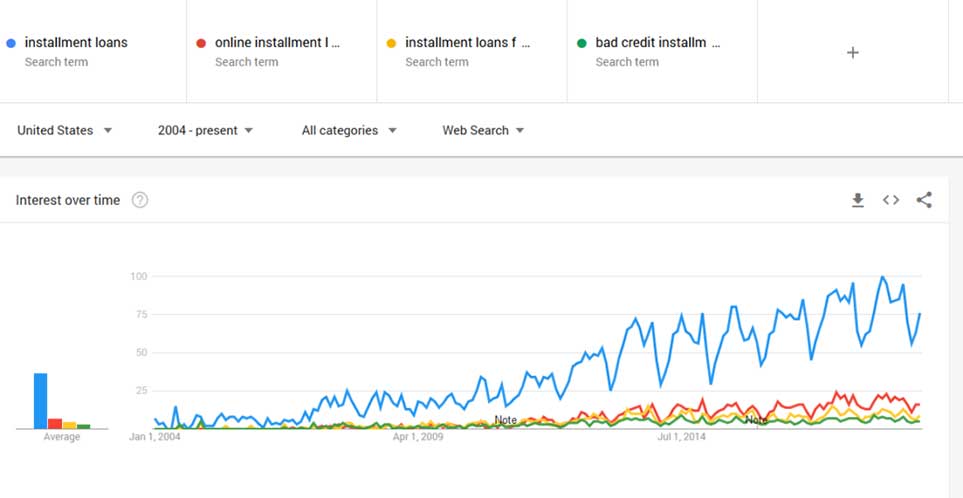