People take out loans to pay for all kinds of things. Personal loans are a type of installment loan that people can take on to pay for whatever they want. However, since they’re less structured than car notes, mortgages, and other types of loans that can only be used for specific purposes, borrowers end up unable to pay their personal loan debts back more often than with other types of loans. On the other hand, personal loans are great for emergencies or paying for things that don’t have existing specific-use loans available for them.

Whether you like personal loans, aren’t a fan of them, or simply want to learn more about them, here are six statistics that you might find interesting.

Statistics show that 31 percent of personal loan borrowers take on such debt to pay for vehicles, which includes both the purchase of new vehicles and repairing ones that they already own. About one-quarter percent of people who have taken out personal loans have done so to pay for expenses that occur regularly, such as paying for utilities and rent.

Both of these personal loan uses will become more prevalent in coming years as the gap between low-income households and their wealthy counterparts widens.

3. The value of personal loans is becoming greater as years pass

Personal loans for small amounts of money have been available for some time. As competition between lenders willing to take on unsecured personal loans has increased, lenders have been forced to stick out from the crowd by offering personal loans of greater values.

4. Personal loan debt will rise in relation to GDP

In 2018, the proportion of personal debt in the United States to GDP was 77.8 percent. That figure is slated to increase in coming years to as much as 92.7 percent by 2029. The reason for the increase in this proportion is not that the United States’ economy will shrink; rather, people will take on more debt because they will find it harder to pay for things over time.

5. Online lenders have played a major role in the personal loan industry’s growth

6. The outstanding balance of personal loans continues to grow 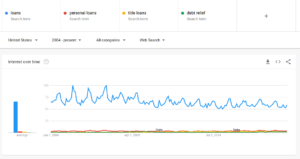